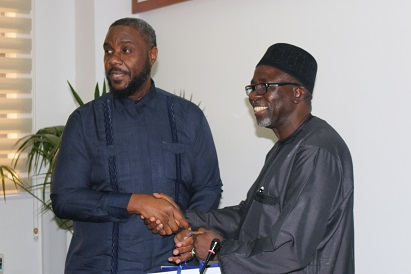 Residents of the Federal Capital City, especially Life Camp, Gwaripa, Dawaki and environs will soon leave a sigh of relief as the Abuja Electricity Distribution Company (AEDC) is making frantic efforts to boost power supply to those areas.

3.     The Executive Secretary expressed the FCT Administration’s concerns about the poor power supply to Life Camp, Gwarinpa, Dawaki and its environs which house some key personalities including Diplomats as well as the street-lights particularly along the Umaru Musa Yar’Adua Expressway which is a major gateway into the city.  He lamented the current poor visibility and illumination in the city adding that “our street lights mean a lot to us.”

4.     He stated that Abuja needs to be developed into a world-class city using the city’s Master Plan as the document is not just about the provision of designs for the planning of the roads and buildings, but that several other components must equally be carefully planned, designed and implemented.

5.     The Executive Secretary called for collaboration between the AEDC and the FCDA to lighten up and eradicate or at least minimize the perennial power disruption in the city, emphasizing on the need for the AEDC to always reach out to the FCDA as the custodian of the Electricity Master Plan of the FCT before embarking on any electricity project in the city for proper guidance.

6.     This according to him is necessary because the FCT Act gives the FCDA the sole responsibility for the development of all infrastructure in the entire territory.  This includes water, sewage, telecommunication and electricity infrastructure apart from the roads and bridges.

7.     He further pledged to institute a regular coordinating meeting between the two organizations to identify areas of cooperation as well as quick resolution of areas of conflict that are likely to affect the steady supply of electricity in the city and territory.

8.     Responding, the AEDC MD explained that “there are a lot of projects we are undertaking that will relieve the outcome of the problem.  Life Camp is being supplied from the source from Dawaki.  We are trying to evacuate 6 No 33kv feeders that will relieve Life Camp, Gwarinpa, Katampe and even Dei-Dei and others''.

9.     On street-lighting particularly along the Umaru Musa Yar’Adua Expressway, the MD revealed that a security modem would soon be deployed to check the constant vandalization of their facilities which had been responsible for some of the outages.

He added that the, modem when installed will send SMS, raise alarms against vandalism attempts and has cameras and would be remotely controlled.